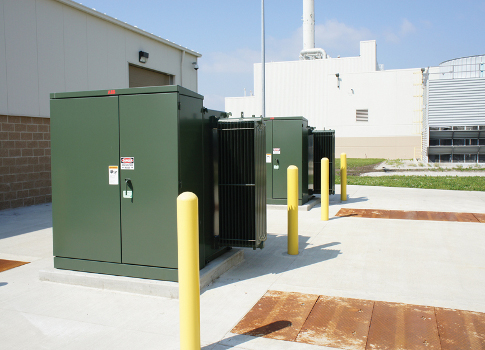 The most efficient way to transport power from point A to point B is to use the highest voltage available.Higher voltage equates to lower currents for a constant amount of power. Losses are a result of current and wire resistance (P = I2 * R). Therefore, decreasing current has a much greater return in reducing power losses than increasing wire size to decrease resistance.

A transformer is required at each point along the distribution path where a change in voltage is necessary. Power produced at a utility company power plant will change voltage numerous times via transformers before reaching the end user. Utility companies typically use medium voltages (5 kV or 15 kV) to distribute power to customers.Commonly used local distribution voltages are 4,160 V, 12.47 kV, and 13.8 kV, while transmission lines that traverse greater distances use higher voltages such as 69 kV and higher. The voltage may be boosted at the production source to a higher voltage for transmission and then reduced to a medium voltage at a neighborhood utility substation. Voltage is reduced again (typically 480 V) at a utility pad-mounted transformer to provide service to an individual building, then reduced to 208 Y, 120 V via a dry-type transformer in a building electrical room (see Figure 1).

Today, as design teams and building owners strive for high-performance, net zero buildings, maximizing transformer efficiencies is essential. After a transformer is placed in a building and energized, it begins consuming energy and is never turned off. Even when a building is unoccupied and all loads on the transformer are turned off, the transformer itself continues to consume energy 24 hr/day. The losses of a transformer contribute to heat in the building. More efficient transformers require less cooling to maintain a desired room temperature, which in turn saves more energy.

Over time, both industry and government regulatory agencies-National Electrical Manufacturers Association (NEMA) and U.S. Dept. of Energy (DOE), respectively-have worked in tandem to advance the efficiency of transformers. In 1992, the DOE commissioned a study of transformer efficiency. The result of the study revealed that on average, low-voltage dry-type transformers are loaded to only 35% of the nameplate rating. Because equipment is sized for maximum peak demand using the conservative diversification factors allowed by the National Electrical Code (NEC) and loads can fluctuate based on time of day or time of year, the results of the DOE study were not surprising to design engineers. In the 1990s, many transformers were designed for maximum efficiency at much higher loading, when in reality most transformers will never experience 100% load. The 35% load identified by the DOE study provides a clear baseline for improving performance.

Following the publication of the NEMA TP 1 standards, a variety of compliant products became available on the market. Design professionals embraced these standards and included the requirement for NEMA TP 1 compliant transformers, tested to the NEMA TP 2 standard in specifications, shortly after the standards were published.

Then in 2005, the DOE passed the Energy Policy Act of 2005. This legislation required all dry-type transformers rated 600 V or less and manufactured and installed in the U.S. to meet the NEMA TP 1 requirements as of Jan. 1, 2007. Prior to this regulation taking effect, the DOE did not regulate the energy efficiency levels of transformers. The DOE soon followed with regulations for liquid-immersed and medium-voltage dry-type distribution transformers. In 2010, the DOE published a formal Code of Federal Regulation for energy efficiency levels for liquid-immersed and medium-voltage dry-type distribution transformers. The regulation was coded as 10 CFR 431. The next advance occurred in 2009 when NEMA launched its NEMA Premium Efficiency Transformer Program. This required transformers dubbed NEMA Premium to have 30% fewer losses than the DOE 10 CFR 431 regulation, which was still being formalized at that time. Most major transformer manufacturers bought into the program and agreed to make transformers meeting this new NEMA Premium standard available to the marketplace.

At this time, the efficiency levels in the current regulations were based on the 2002 TP-1 standard created by NEMA. With an industry agreed-upon standard in place and manufacturers committed to creating product, it seemed inevitable that the DOE would follow the NEMA Premium standard as it had done with NEMA TP-1. However, this was not to be. On April 18, 2013, the DOE published a final ruling (78 FR 23335) amending its 10 CFR 431 energy efficiency standards for low-voltage dry-type, liquid-immersed, and medium-voltage dry-type distribution transformers. The new standards will be placed into effect Jan. 1, 2016. The new efficiency levels are similar to the NEMA Premium levels, but are not a consistent 30% decrease in losses across the board (see "Candidate and trail standard levels" on page xx). For low-voltage dry-type transformers, the percentage decrease in losses varies from 29% to 36% depending on size (see Table1).

It is anticipated that manufacturers will evolve their current NEMA Premium lines to meet the DOE’s new 10 CFR 431 requirements while striving to maintain compliance with the NEMA Premium standard. The DOE predicts that the amended energy efficiency standards will save consumers up to $12.9 billion for equipment sold from 2016 to 2045.

Currently, the efficiency of low-voltage dry type transformers must meet the current 10 CFR 431, which also is the NEMA TP-1 standard. NEMA Premium products that are available on the market use copper windings and have temperature rise ratings of 176 F. The cost of a NEMA Premium transformer could be as much double of the cost of a standard NEMA TP 1 transformer with aluminum windings and a 302 Frise rating. NEMA Premium products will save energy, with the amount of savings and the duration of payback depending directly on the utility rate. In just over one year’s time, all distribution transformers will be required to meet the amended 10 CFR 431 requirements and NEMA TP-1 will be a legacy.

Standards and regulations for transformers define minimum efficiency levels under certain test conditions,including percentage of nameplate loading and temperature. During operation in the real world, these parameters are not fixed because the load will change as devices cycle on and off. As the load varies, the efficiency will decrease proportional to the percentage of nameplate rating for which it was optimally designed.

The types of transformer losses are core (no-load) losses and coil losses, also referred to as load losses.The no-load losses are a function of core construction and are independent of the load. Load losses vary proportionally to the square of the load. NEMA standards define minimum efficiency levels, but do not define a maximum no-load loss component. Equipment manufacturers must determine the best method to achieve desired efficiency levels. Therefore, two transformers, both with the same efficiency under the defined test conditions, could have different efficiencies under other conditions.

There are a number of items to consider when specifying a transformer. Options for a low-voltage dry-type distribution transformer include:

Although aluminum is less expensive than copper, NEMA TP 1 level performance can be achieved with either copper or aluminum windings.

If the load is known to produce harmonics, K-rated or harmonic mitigating transformers should be considered. K-rated transformers were introduced in the 1990s as the adverse effects of nonlinear loads were recognized. As offices became populated with computers and electronic devices, some electrical systems became overtaxed, and harmonics made these situations worse. The K-rated transformer was designed to tolerate the presence of harmonics and the additional heat generated by these loads. At onetime, transformers with K factors of 4, 9, 13, 20, 30, 40, and 50 were available. Today, K factors of 4 and 13 have emerged as standard solutions as widespread use of K-rated transformers has fallen out of favor with specifiers. The challenge of harmonics appears to have subsided with the understanding that transformers only carry an average 35% load following the 1992 DOE study.

Other considerations in transformer selection

Troy Thompson is a principal with DLR Group‘s Overland Park, Kan., location where he leads the electrical design practice. He joined DLR Group in 1992 and has designed complex electrical systems fora variety of commercial and private clients. He is an active member of Building Industry Consulting Services International and is a registered communications distribution designer.