The DC Water Headquarters is a 150,000-square-foot office building built above and encapsulating an operating sewage/storm pump station sited on the bank of the Anacostia River.

One of the primary challenges for the project was to build the new DC Water headquarters on top of an operating wastewater pump station around the existing underground sewer piping infrastructure serving the pump station. The headquarters partially encapsulates the two-story pump station, thus utilizing the site for the ‘highest and best use.’ Most observers of the existing squat pump station are unaware that the building extends 40 feet below the surface or that there is an extensive network of piping and conduits leading in and out of its lower levels. Another challenge was that the site for the new headquarters is right on the Anacostia River in downtown Washington, D.C. and the design team wanted to optimize the great views available for the new headquarters building.

The headquarters’ structural foundation was designed to avoid the existing infrastructure, which ranged from directly below the surface to deep below the ground. The building design required the structure to span over the pump station in two directions, provide large cantilevers, use ‘walking’ columns to support the projecting south façade and strategically locate foundations to avoid the existing below-grade utilities.

Critical to the success of the project was that all of this new construction had to happen without any interruption to the existing operations of the pump station. 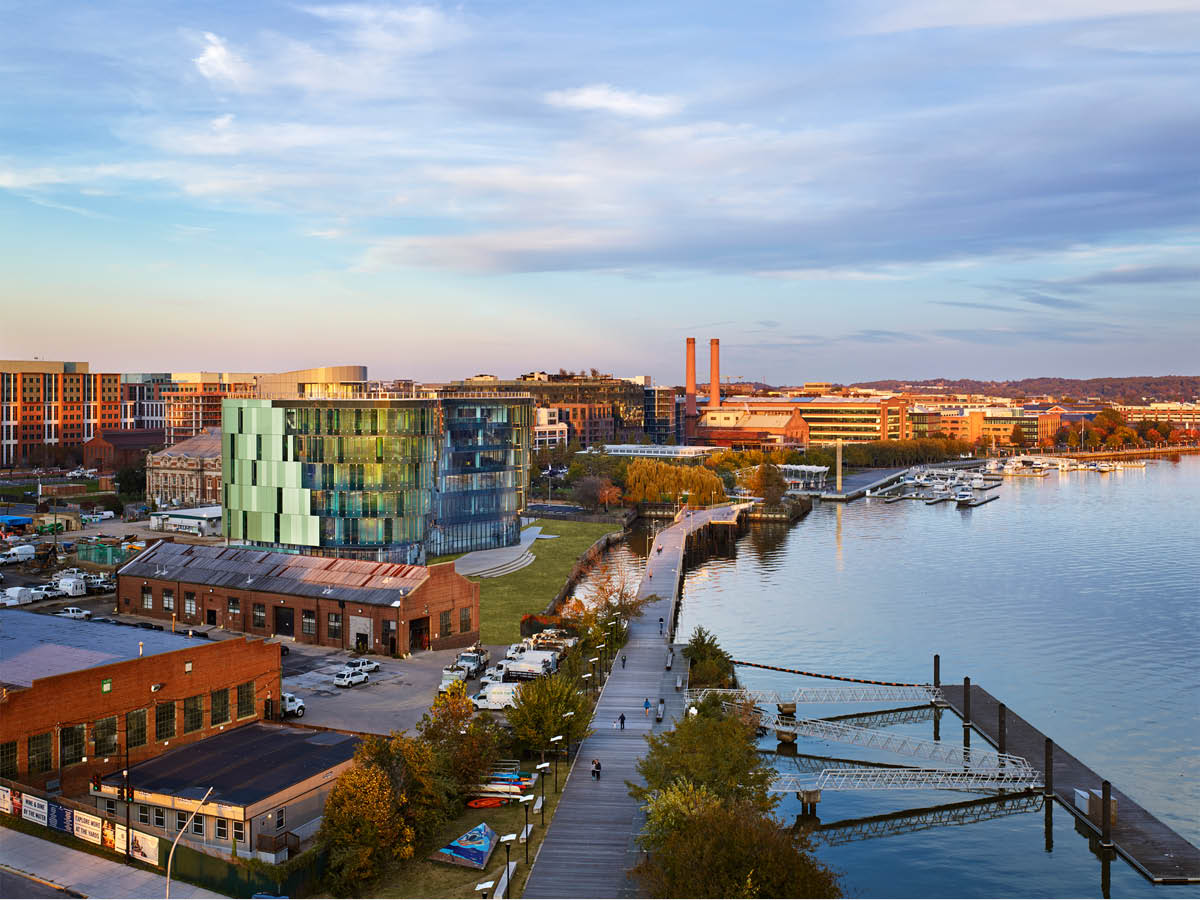 The building and site incorporate state-of-the-art sustainable and resilient design strategies that results in a dynamic workplace. The bold, innovative statement reflects the agency’s environmental stewardship.

The building’s most distinguishing feature is its sinuous form, which may appear to be a purely sculptural exercise, but in fact reflects a pragmatic response to the unique constraints of the site. The building’s form optimizes multiple criteria. It maximizes office area with views of the river, maintains a narrow footprint with excellent access to daylight, provides curvature, which self-shades the façade, avoids zoning setbacks and viewsheds and works with the limited site areas that can accommodate structure. The building core—elevators, toilet rooms and other back-of-house spaces—is located in the only zone of the building without sufficient need or access to light.

To remain independent of the pump station, a 200′ long, 5-story truss and a smaller perpendicular truss support the north half of the new building, the portion that is over the existing station. This allows the remaining portion of the new structure to be conventional steel. Even then the steel columns are meticulously located in order to avoid the below-grade infrastructure. The 200′ long truss is positioned at the back of the building and gaps between it and the north curved façade are used for stairs and other functional spaces.

The building massing is further refined. On the south side, each floor projects 2′ beyond the floor below, creating effective passive shading in the summer months. To minimize cost and improving energy performance, the building skin is developed with 40% glazing on the south façade, taking advantage of views and transitioning to metal panels as the façade progresses to the north. Punched windows are placed within the metal panel zone as needed to accommodate interior programming. The painted aluminum metal panels on the north side of the building are configured with three variations of green, referencing the historic use of copper for water transmission. The pattern created by the variaed panels is a visual ‘mapping’ of the annual solar gain that hits the façade. 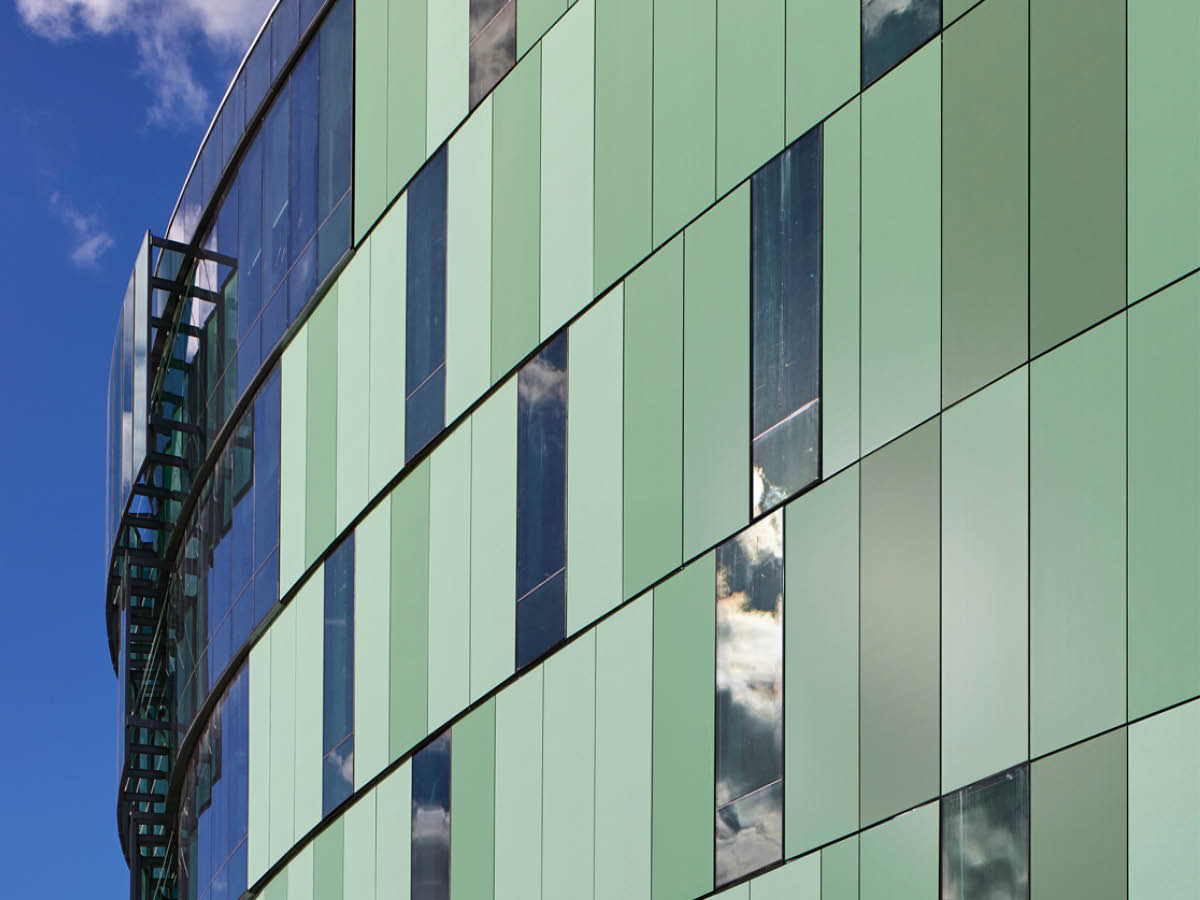 The continuous facade is composed of four-foot-wide planar modules, each containing either a pane of glass or a metal panel. The curvilinear plan is primarily derived from the need to maintain and protect the existing mid-20th century pumping station along the northern edge of the site, as there wasn’t enough space to avoid the existing structure. The use of glass in the undulating riverfront façade also allows ample daylight to penetrate deep into offices.

cooling and 1650 MBTU/H system is one of the first-of-its-kind implemented in the United States. This heat exchanger is used in conjunction with a modular six pipe heat pump chiller capable of providing simultaneous heating and cooling to the building. A sewage waste energy exchanger (SWEE) allows the headquarters’ HVAC system to use sewage water as the primary heat sink and heat source for the building. This technology reduces the need to use a more traditional heat sink, such as a cooling tower. It also eliminates the need for a more traditional heat source, like a boiler.