20 years in the making—and it proves well worth the wait. The project was completed in October 2020 and includes the much-anticipated planetarium and greenhouse. 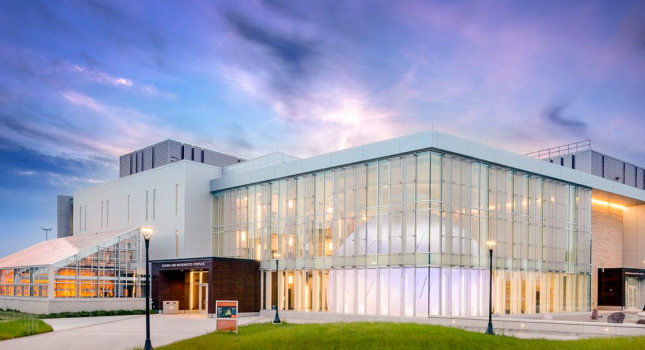 For SUNY Buffalo State College, its new science building has been almost 20 years in the making—and it proves well worth the wait. Named the Science & Mathematics Complex (SAMC), the building was carefully and thoughtfully phased to stay within budget while including everything Buffalo State needed to advance its STEM goals. The final phase of the project was completed in October 2020 and includes the much-anticipated planetarium and greenhouse.

The original science center at Buffalo State consisted of two buildings: Science 1, built in 1963, and Science 2, added to the south side of Science 1 in 1967. For these facilities to remain functional and meet the SUNY system program objectives, all building systems needed major upgrades and replacement. CannonDesign provided architecture, engineering, laboratory design, lighting design, cost estimating, environmental graphics, and interior design services to design a facility to meet these needs.

To maximize the financial benefit to the college in both the short term and the long term, the planning team considered multiple renovation options that would achieve current and future programmatic and design goals while adhering to constraints of site, logistics, and schedule. Cost analyses revealed a combination of renovation and new construction would cost $53 less per square foot than an entirely new facility, while providing the complement of program space. The phased plan that was developed back in 2005 at the launch of the project remained largely unchanged as the project moved through the different phases and allowed the campus to continue all academic programs uninterrupted. Phase I, completed in spring 2012, built a 96,000 sf addition along the building’s west side to house new teaching and research labs, faculty offices, and instrumentation rooms. Phase II, completed in 2016, fully renovated the existing 63,000 sf Science I with administrative offices, student club space, meeting rooms and low-impact lab spaces. The existing Science 2 building, deemed to be beyond its useful life as a science facility, was demolished as Phase III of the project in 2017. Completed in late 2020, Phase IV included constructing a second addition of 45,000 sf along the south side of the complex, complete with research labs, greenhouse, and planetarium.

The recently completed planetarium is an iconic addition to the building’s overall design. Courtesy: CannonDesign

The architecture of the new Science Building is inspired by the programs within its walls, expressing aspects of science in physical form. The idea that the scientific process is one of patient and careful experimentation through iteration and exploration is central to the design concept. Another critical aspect expressed is the idea of knowledge-sharing, interaction, and discussion along the path of discovery.

The three-story, skylit atrium literally puts “science on display,” where students and researchers present collaborative projects in large display windows. This space has been thought of in a geologic sense as walking through a gorge, to relate to the significant role the Niagara Gorge has played in the evolution of modern geology. The proportion and materiality of the atrium space—a tall vertical space with dappled light, utilizing stone as an interior finish—reinforces this idea. Balconies, alcoves, and open bridges on all floors encourage casual meetings as well as quiet study.

The skylit atrium acts as a connector, a student hub, a meeting space and a way to feature science on display. It stretches north to south, connecting previously disparate parts of campus. Courtesy: CannonDesign

The atrium also serves as an enclosed pass-through for science and non-science students alike, a feature that is appreciated during the Buffalo winter. This “pedestrian spine” connects the once disparate dormitories at the north side of campus with the academic core to the south.

As a way to enrich the overall design, concepts from various branches of science and mathematics serve as underlying themes in the refinement and development of different building areas and components. These themes provide a way to subtly communicate scientific concepts through the organization and logic of the building design and, in a way, reinforce the notion of “science on display.”

▪ Prism – implied in the use of spectral colors at the west corridor walls and reflective and translucent materials in the atrium space.

▪ Fibonacci Series and Golden Ratio – used as the basis for providing order and proportion to the composition of the west and north elevations and to the graphic panel system in the atrium.

▪ Chromosomes/DNA Fingerprinting – implied in the patterning of the metal panels on the west and north elevations.

▪ Circulation – reflected in the planning of how people will move through the building and how the mechanical branch systems are organized and distributed within the structure.

Flexibility in Laboratories Keep Science at the Forefront

Laboratory experts were charged with designing laboratories that would serve the college far into the future. In order to ensure laboratory spaces can evolve with innovation, the design must allow for flexibility in the application of new technology and equipment. The SAMC provides this flexibility and has been tested with success as the project evolved over time. In the new addition, laboratory spaces are arranged along a centralized duct and piping distribution spine that runs the length of the building. Duct risers in the spine, fed by common supply and exhaust duct headers in the penthouse, align with the modular floor plan system, facilitating future equipment changes and program reorganizations. With this organization of supply and exhaust, risers are much shorter than normal, supply and lab exhaust fan systems use less power, and horizontal ductwork is much smaller than in a traditional lab building. Smaller ductwork in turn enabled the new addition to be built with a relatively low floor-to-floor height of 13 feet, much lower than the 16 feet a typical new lab would use. This in turn allowed easier transitions to the existing building, which was built with 11’-4” floor-to-floor heights. Diagram of the central utility “spine” in the new addition. Courtesy: CannonDesign

The flexibility of the central spine concept was tested during the latter stages of the project, as the campus found student enrollment in certain programs lagged their 2005 projections. The Phase IV project saw a reorganization of program pieces that required the elimination of some lab types and re-definition of other lab spaces. This redesign was easily accomplished with the capabilities of the spine. The Buffalo State College Science Complex also represents an ideal BIM process. CannonDesign’s use of all Revit-based software on this project – one of the first projects in the firm to utilize this process – enabled the integration of building design, construction, and management processes. Our integrated project team used a single model that combined information from Revit Architecture, Revit Structure and Revit MEP models to coordinate not only the physical aspects of the building design, but also the quantity takeoffs, cost estimates, specifications, project schedule, and construction drawings to allow a more accurate alignment of scope and budget.

In addition, the Revit model was used extensively to analyze building performance and energy usage—helping the design team to optimize its sustainable design strategies. The BIM process and Revit model helped minimize costly and time-consuming redesigns, which was essential on this decades-long endeavor.

The firm’s use of BIM integrated design and the entire family of Autodesk Revit-based software on the SAMC was a major factor in Autodesk’s selection of CannonDesign for the 2009 BIM Experience Award. This award honors organizations for their innovation, leadership, and excellence in implementing BIM using multiple design integration tools.